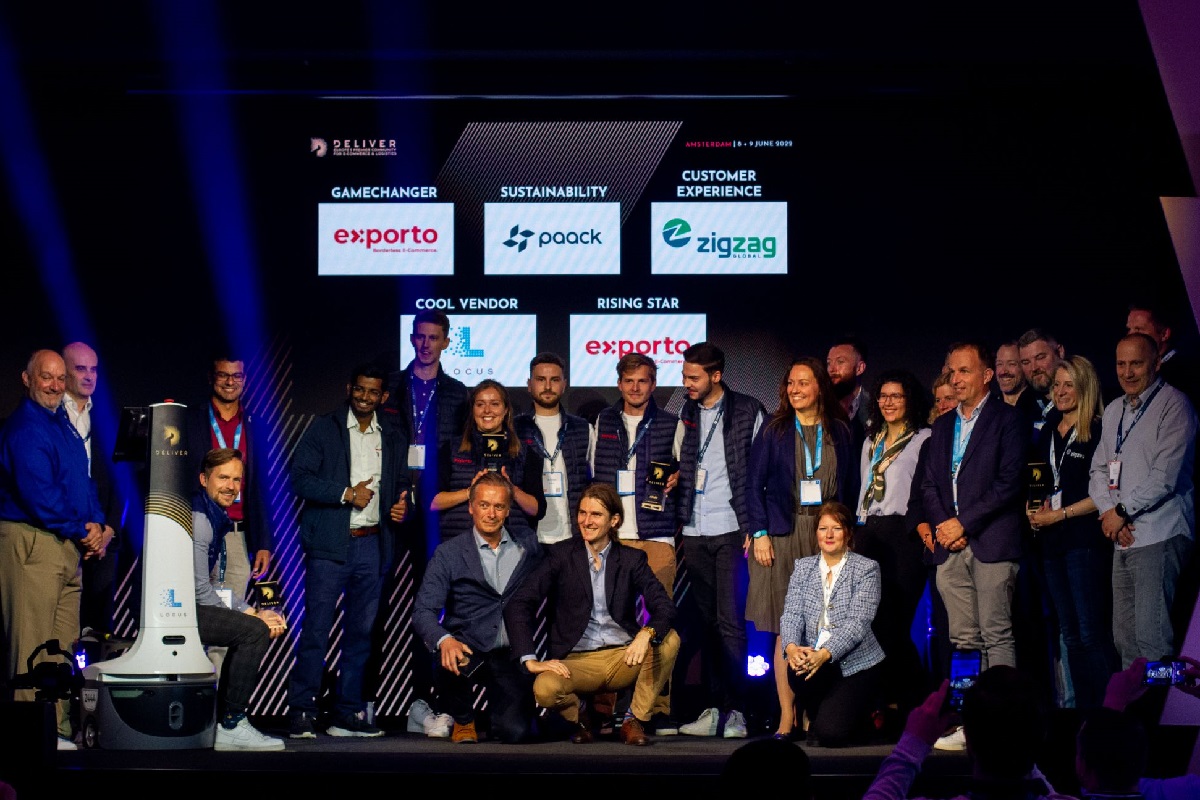 At the same time, parcel carriers and logistics providers used the high-profile e-commerce logistics event to present new services and solutions to offer retailers and consumers more convenience and choice as well as more sustainable deliveries.

This year’s DELIVER attracted a new record of 1,700 participants, including about 900 retailers and 128 exhibitors, to the TAETS venue on 8-9 June. The event featured a wide range of informative and inspiring keynote presentations, company workshops and other sessions.

Notably, the exhibition hall was packed out on both days as retailers held a series of scheduled one-to-one meetings and visited the stands to inform themselves about new e-commerce logistics solutions and technologies. The evening networking event held outside was a big success.

Retailers also voted for their favourite suppliers at the event. This year’s winners were:

Among various company workshops, DPDgroup, one of the big-name sponsors, presented its latest E-Shopper Barometer and discussed current market trends. La Poste’s international parcels subsidiary profited from last year’s continued growth in European e-commerce, which grew by nearly 13% on top of a pandemic-driven 26.7% surge in 2020. This took online shopping to 13.3% of total European retail sales, according to its in-depth report.

DPDgroup’s eCommerce Director Hervé Crochet said that last year’s growth was driven by regular online shoppers who make up about half (48%) of all European e-shoppers but accounted for 86% of total spending. Notably, this consumer group bought more and more everyday goods such as food and drink online last year, he pointed out.

This year, however, delivery companies face much tougher trading conditions due to the effects of accelerating inflation, surging fuel costs, weaker consumer demand, collateral effects from the Ukraine conflict, supply chain disruptions in China and other negative factors.

Even though volumes declined in the first quarter as a result of these trends, Crochet declared confidently: “What we experienced in 2020 and 2021 was exceptional. We will get back to mature growth.”

Looking ahead, Thiemo van Spellen, DPDgroup’s Global Accounts Director, told delegates: “We do not expect such an extreme peak this year.” As a result, pressure on capacity would ease. “Most carriers have already invested to increase their capacity. Growth is down now, so capacity will not be an issue,” he commented.

In response to these trends, DPDgroup would focus on “resilience, customer centricity and sustainability”, van Spellen continued. In particular, the carrier aims to boost cross-border business, enhance customer technology, with the MyDPD app rolled out to more markets, and offer various local solutions in specific markets.

Meanwhile, the group’s fast-growing urban delivery unit Stuart will continue its European expansion this year, according to executives. Sebastian O’Keefe, newly-appointed EVP for Growth and a former Amazon Shipping manager, said Stuart had launched in three new markets – Italy, Poland and Portugal – over the past two years in addition to its existing large-scale operations in France, the UK and Spain.

The technology-based business, which links more than 2,000 retailers with a pool of 40,000 couriers for urgent, same-day and next-day deliveries in 125 cities across Europe, already reached revenues of more than €500 million last year.

Highlighting ‘Local Commerce’ as the ‘Third Generation of E-Commerce’ at a company presentation, O’Keefe predicted there would be more shipping from store and micro-fulfilment hubs for urban delivery in future. “There’s a great opportunity within same-day and precise deliveries. There’s a huge opportunity to move stock into city hubs for urban fulfilment,” he declared.

But given that very few consumers are prepared to pay extra for same-day deliveries, carriers need to find cost-effective models for such delivery services, he stressed. “You have to build density of routes with a mix of pickup and drop-off points.” As a ‘white label’ delivery provider for various major brands, Stuart could consolidate volumes and thus deliver more cost-effectively, he argued.

Citing various customer cases, Marcus Hurd, Stuart’s Fulfilment Director, told the audience of retailers and other delegates how the company is providing 30-minute deliveries from 180 Coop stores in the UK, same-day cross-border deliveries from Germany to Paris for UNIQLO, and next-day ‘hub to home’ deliveries for Zara in France.

“More and more carriers want to work with us,” John Shields, InPost UK’s business development manager, told a company workshop that largely focused on the UK. He noted that the locker company had worked closely with Hermes (now Evri) for several years but now aimed to sign up delivery management systems “to own the end-to-end customer experience”.

Asked about current trends, Shields stressed: “We have not seen a softening yet, although we think it’s coming. But we think (our) growth will continue as retailers promote the benefits of sustainability. A lot of the retailers we are talking to want to increase their share of Out of Home deliveries. There’s a big shift.”

InPost claims that deliveries to its parcel lockers are about a third more environmentally friendly than to homes in terms of their CO2 footprint due to bundled deliveries to the self-service collection and returns points.

In terms of services, Shields said 150 retailers are now using the company’s returns service, highlighted the “very successful” label-less returns solution that was launched recently, and predicted that a new ‘packaging-free’ returns service being tested in Poland could be rolled out to other markets in the near future.

“In returns we want to have a 30% (volume) share from those retailers using us by the end of this year,” he declared. Most parcel returns in the UK are handed in at post offices and then processed by Royal Mail. Asked about Zara’s recent move to charge for returns, Shields described the move as “very interesting” and predicted that “others will follow.”

The other industry leader to present e-commerce survey results was DHL eCommerce Solutions, which has recently conducted consumer research on delivery issues in nine European countries.

Alexander Schmitz-Huebsch, Global VP for Product Management, told a company workshop that a clear 73% of respondents wanted home delivery as their first preference while 22% were happy with alternatives such as parcel shops and lockers, although these figures varied widely between the different countries. Moreover, nearly a quarter (24%) of survey respondents said they would be ready to pay more for sustainable deliveries.

To meet these customer preferences, he pointed that DHL’s Parcel Connect network now covers 87,000 parcel collection points across Europe while the business offers various sustainable delivery solutions. He added: “Deliveries are becoming more dynamic. The industry is working with higher volumes. So we have to exchange more information (with customers) to cope.”

In 2023, DELIVER will expand geographically with a new Americas event in Las Vegas on 27-28 September. The well-established Europe event will take place on 7-8 June, again in Amsterdam.