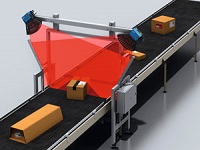 Furthermore, the update has improved accuracy for non-contact dimensioning of goods, cartons and parcels regardless of shape, according to the company.

The SICK VMS4200/VMS5200 track and trace system achieves inline measurement with even higher accuracy to determine precise dimensions and positions of both cuboid and irregular shapes, by using the laser scanning capabilities of its LMS4000 2D LiDAR sensor.

Also, the processing capability of the SIM2000 Sensor Integration Machine, which has been incorporated into its new SICK VMS systems as standard, makes for the improvement.

“In a highly competitive market, operators are under constant pressure to find faster, more effective ways to plan their automated material flows, make better use of warehouse or vehicle storage space and maximise their revenue generation.

“Now the SICK VMS4200/5200 can deliver the most precise length, width and height information ever, alongside greater in-built flexibility to process objects of any size or shape at high speeds. The system therefore promises rapid returns on investment and operators can expect improved plant availability, fewer manual interventions, and the opportunity to increase sales revenue through slicker invoicing operations.”

The SICK VMS4200/5200 enables early estimation of the storage space necessary when loading vehicles, containers, swap bodies or shelves. So, downstream processes can be more efficiently controlled, warehouse and freight costs are reduced, and potential claims for compensation prevented.

The system can be set up to output 3D images as a PCD file so that damaged or deformed objects can be recognised and removed before storage, and the object can be traced back to the point of damage in the material handling process.

Moreover, the SICK VMS5200 variant is certified to European Measuring Instruments Directive 2014/32/EU (MID), so the dimension data can be used for billing purposes. CEP operators can now achieve a higher legal-for-trade rate thanks to the built-in ability of the VMS5200 to detect objects that are touching or side-by-side.

Improved precision now also enables the billable dimensioning of flat objects, such as books or letters with minimum heights of up to 20 mm.

The SICK VMS4200/5200 can be used as a stand-alone solution or in combination with reading station and weighing technology. Software customisation and set-up is straightforward to suit each application.