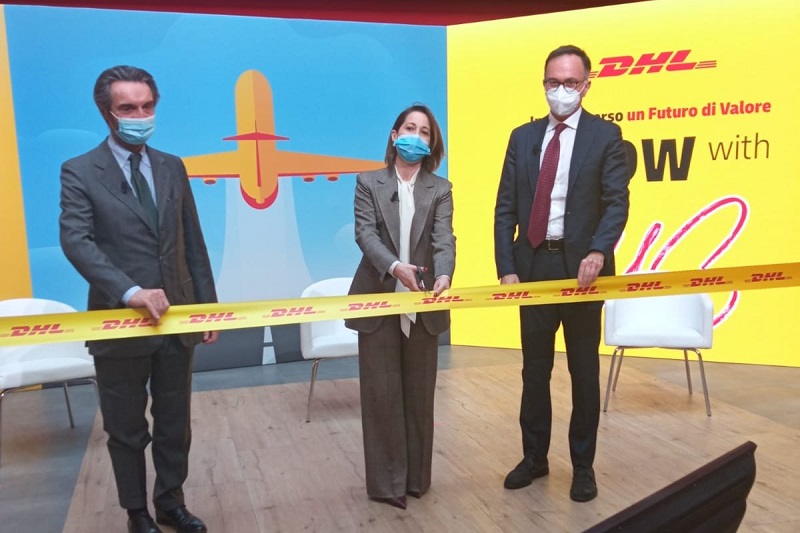 DHL Express has officially opened its new €110 million air hub at Milan’s Malpensa Airport to increase capacity in Italy as part of an ongoing €350 million investment plan in the country.

The Malpensa facility, which went into operation last September, has become one of DHL’s four main air hubs in Europe (along with the main facility at Leipzig/Halle Airport in Germany and the facilities at Brussels Airport and East Midlands Airport in the UK).

Covering about 20,000 sqm, the hub has more than 900 employees, capacity to handle 38,000 pieces per hour and has more than 30 daily/180 weekly flights linking Italy with the rest of Europe, the U.S., the Middle East and North Asia. Since December 30, DHL Express Italy has been managing the delivery of Covid-19 vaccines to Italy through the Malpensa hub.

Nazzarena Franco, CEO of DHL Express Italy, said: "The Malpensa Hub is the flagship of our strengthening strategy in Italy, for which we have in progress an ambitious investment plan of over €350 million with the aim of being the partner of companies that produce and export Italian excellence in the world.”

Reviewing the company’s role over the past year, she added: "During the pandemic we have never stopped, and indeed we have always tried to give quality answers to the needs of companies, supporting their efforts in particular in foreign markets. Lombardy represents one third of the country's exports thanks to a dynamic entrepreneurial system and highly innovative supply chains such as IT, textiles, fashion, aeronautics, automotive and with the new hub we want to contribute to the growth of Italian exports.”

Welcoming DHL’s commitment to the country, Italian economic development minister Giancarlo Giorgetti said in a video message: "This investment is a sign of hope and a glimmer of light at a time when the economy is objectively not doing well.”

Connecting Italy to Europe and the world

The new Malpensa hub enables DHL Express to ship goods to and from Italy with connecting domestic flights to Ancona, Pisa and Naples. There are daily international flights to and from the other European hubs (Leipzig, Brussels and East Midlands), regional sub-hubs such as Paris, Vitoria (Spain) and Cologne, as well as major destinations such as Barcelona and London and several regional markets (Zagreb, Athens, Budapest and Thessaloniki).

DHL Express also has flights from Malpensa to Bahrain and Seoul as well as five weekly flights to its U.S. air hub at Cincinnati (since November 2020).

The hub, on a 55,000 sqm site, was built to meet Deutsche Post DHL environmental standards. Apart from the 4km sorting system, there are 150 docking ports for vehicles. To build the hub, DHL Express Italy collaborated with partners of excellence like Progetto CMR, Fives Group and Johnson Controls Italy, Itinera, Rapiscan and Saco.

Armando Brunini, CEO of airport operator SEA Aeroporti Milano, commented: "SEA's partnership with DHL, which started more than seven years ago, sees the construction of the DHL MXP HUB as a major milestone. Also thanks to this facility, Malpensa confirms its leadership role in the Italian air cargo panorama, consolidating its position as the main cargo airport in Southern Europe.”

He underlined: “In this difficult moment caused by the global pandemic, cargo is a fundamental factor of resilience of the national economic and productive system. The contribution of DHL and the express courier segment (+ 93% in the first months of 2021) to the growth of the national economy is evident if one considers the leap of + 30% approx. that goods exported from Malpensa recorded in 2021.”

Brunini concluded: “We will work in synergy with DHL to confirm the growth path of air cargo, and implement the important infrastructural developments planned for the Malpensa Cargo City."