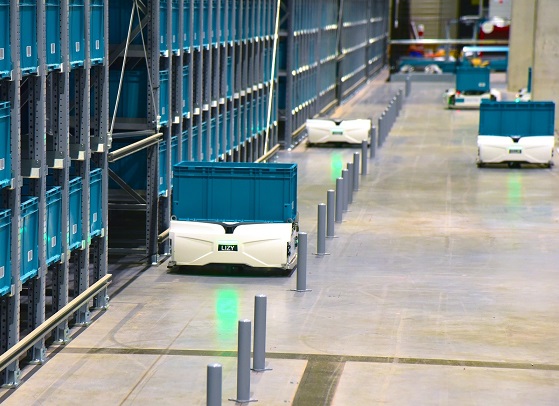 Exotec, a leading robotics solution for logistics and creator of the Skypod 3D warehouse robots, has raised $90 million to expand its international activities.

The financing round was led by 83North with participation from Dell Technologies Capital and supported by historical investors, Iris Capital and Breega.

This new funding will further fuel Exotec's international development, especially their recently formed Atlanta and Tokyo teams and help them meet the growing demand for warehouse automation technology in the United States and Asia.

Founded in 2015, Exotec has the ambition to become the leader in robotics solutions for logistics and forecasts they will produce up to 4,000 robots per year by 2021.

Exotec's revolutionary robots allow retailers and e-merchants to quadruple their warehouse productivity and increase up to five times their storage capacity. Their autonomous robots can move in a unique three-dimensional pattern at a speed of 13 feet per second, creating a faster and more efficient picking and preparation process.

Warehouse robotics have a 45% CAGR while the global automation market's CAGR is also constantly growing by 10 to 15%.

"There is a global need for robotics solutions in warehouses, but logisticians are often concerned about investing in traditional fixed automation in this fast-changing world. This $50 billion market should be supplied with flexible and efficient solutions to fulfill customers' needs and new shopping timelines. We offer a new generation of warehouse robotics and have the largest deployed and operational systems across three continents," said Romain Moulin, Co-founder and CEO of Exotec.

Exotec revenue doubled in 2020 as several new international clients, including Carrefour and Fast Retailing (Uniqlo group), adopted their technology in key warehouses. This latest funding round will allow the company to further expand and deliver their fully adjustable robotics solution to a wider range of clients in the U.S., Europe and Asia, across numerous B2B and B2C retail sectors such as fashion, grocery, pharmaceutical, hardware, and manufacturing.

In North America, Exotec is expanding its footprint to meet the increasing demand for automated logistics. The company signed partnerships with highly experienced American integrators such as AHS, S&H Systems and Conveyco to accelerate market penetration. Exotec is also currently hiring in North America to support its operations and its growth.

"Brands and retailers are seeing tremendous surge in e-commerce, accelerated by the current pandemic. They must now transform their supply chain to gain competitive advantage. Exotec is addressing this challenge and is the leading player in scalable robotics systems," said Rudi Lueg, Managing Director of North America at Exotec.

The partnership announced at the end of 2019 between Exotec and international retail company, Fast Retailing, is now delivering its benefits to the group. The technology is under deployment in two warehouses in Japan, with 1,000 Skypods improving logistics efficiency for Uniqlo stores. Exotec Nihon has been created to support the operations in Japan and more than 30 employees will be hired in the coming months.