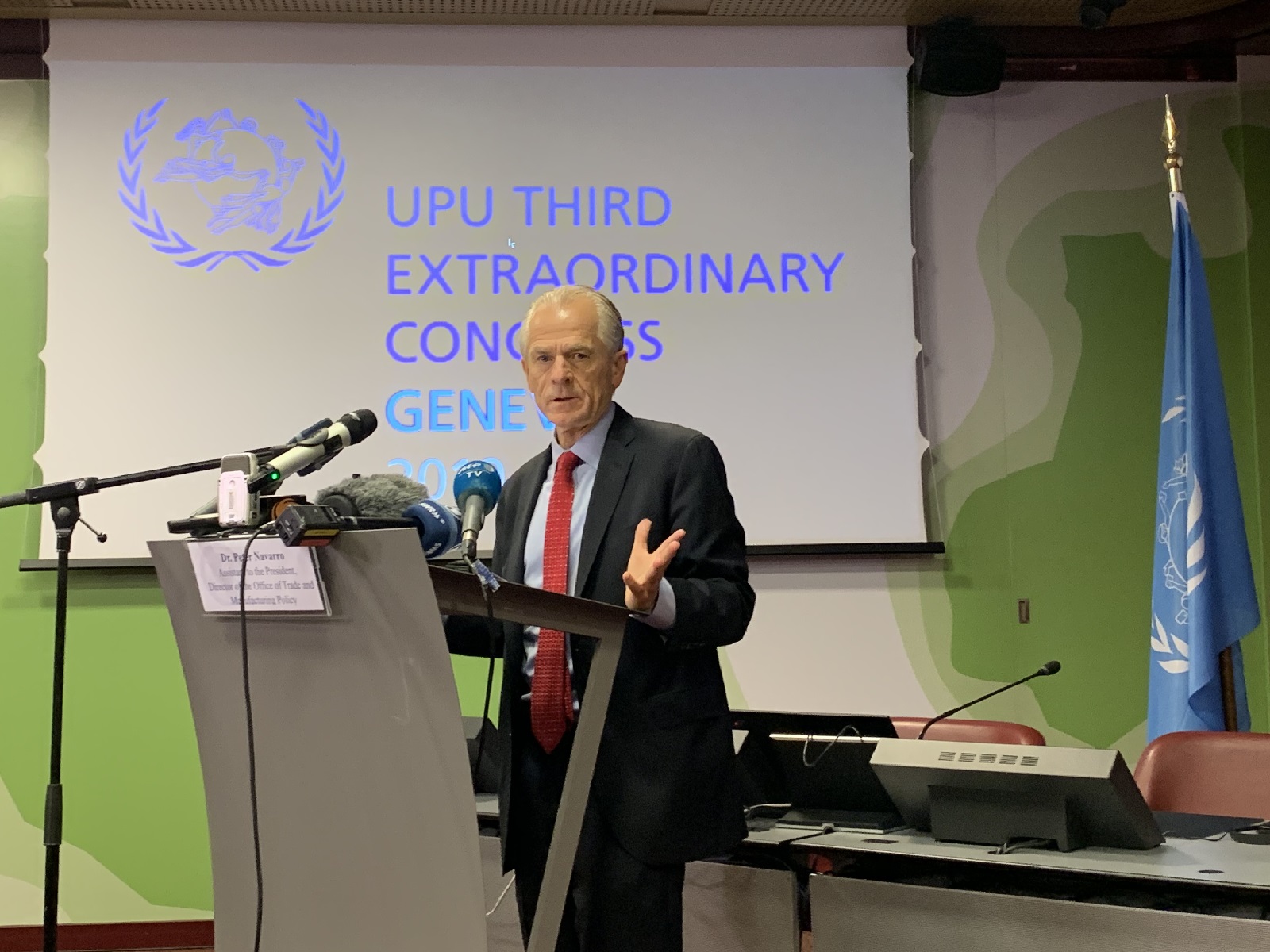 The USA has scored a “total victory” at the UPU Extraordinary Congress and will move to “immediate” self-declared rates for small parcel imports from China and the rest of the world next July, according to presidential advisor and delegation head Peter Navarro.

President Trump “was effectively in the room” during intensive negotiations over the last few days, the forthright US trade advisor told international journalists, including CEP-Research, in Geneva on Wednesday evening.

He was speaking following the unanimous vote by UPU delegates in favour of a compromise deal, labelled Option V (for ‘Victory’), designed to keep the USA in the world postal system. (More details here.) The US had threatened to quit the 145-year-old UN agency in October if a satisfactory agreement was not achieved at the showdown Congress.

Navarro, who headed a 43-person delegation, described the deal as “a huge victory for millions of American workers and businesses”. He commented: “It’s a total victory for the UPU and the US. In terms of the US, we get immediate self-declared rates. China will certainly pay more for the privilege of shipping to our market.”

He said the deal “more than achieved the President’s goal” of eliminating the US Postal Service’s annual loss of $300 – $500 million from delivering import parcels, particularly from China, at rates cheaper than for domestic parcels. He confirmed that under the terms of the UPU agreement, the US Postal Service will move over to self-declared rates at the end of next June.

“There is no question the rates will go up as they should… it’s not just a China problem but it’s primarily a China problem,” he said in response to CEP-Research questions. “We will buy less Chinese stuff, buy more from other countries. We will make more in America, and the market will be free of distortions…This is all good for America.”

Navarro pointed out that the “multi-speed” deal would also help “friends and allies” to move towards self-declared rates in following years.

But he firmly denied a suggestion that a $40 million payment to the UPU over five years as part of the agreement, which will finance electronic data exchange, security measures and UPU long-term liabilities, amounted to the US “buying” the compromise deal.

In contrast, UPU Director General Bishar Hussein described the agreement, keeping the US within the world postal system, as “a victory for the (Universal Postal) Union, its members and citizens of this planet”. He gave credit to every country, including the USA, for agreeing to compromise on their positions.

But with the US set to increase rates from next July and others potentially able to follow from January 2021, he warned: “The end customer will definitely have a higher price. I have no doubt there will be an impact.”

The UPU explained that the agreement will accelerate rate increases to the system used to remunerate the delivery of inbound international bulky letters and small packets. It includes thresholds to protect low-volume, developing countries from the impact of the swift reform.

Countries receiving more than 75,000 tonnes of imported parcels per year (only the USA exceeds this level) could opt-in to accelerate a move to self-declared rates with effect from July 1, 2020. But their rates could not initially exceed 70% of the equivalent domestic tariff, rising 1% a year to a maximum of 80% ten years later.

Any ‘opt-in’ country accelerating to self-declared rates would also have to make a US$40 million contribution to the UPU ($8 million a year over five years), with $16 million dedicated to electronic data exchange and security measures, and $24 million to “funding the long-term liabilities” of the Union.

According to documents presented at the Extraordinary Congress, all other UPU members will gradually move in a five-year period starting in January 2021 towards self-declared rates within certain parameters, including the 70% maximum compared to domestic tariffs.