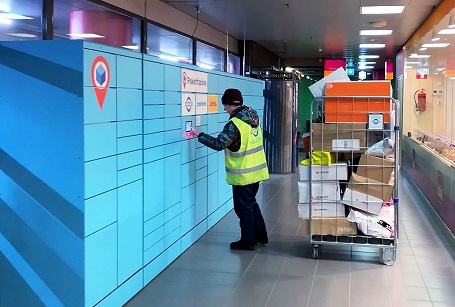 Danish parcel terminal operator SwipBox has successfully enabled 1 million parcel deliveries through its locker network Pakettipiste in Finland over the past year.

Since then, more than one million parcels have gone through the network, which shows how quickly the Finnish people adopted the parcel locker network as a delivery option, the company pointed out.

Timo Värri, Production and logistics director at Lehtipiste Oy said: “We wanted to create convenience for the Finnish people. And we knew that this meant creating an open network with several logistics providers, so that people have easy access to their parcels and SwipBox has the perfect solution for that. The parcel lockers have worked great and the network has really been welcomed.”

The Finnish network ensures that customers can easily pick up their parcels from multiple carriers, which means that they can collect several parcels at once. As more and more consumers are choosing to shop online there is increased demand for pickup points and the simplicity of the Pakettipiste network meets modern customer needs.

Allan Kaczmarek, CEO of SwipBox, added: “We know that more and more parcels need to be delivered all over the world – we see that every day. With a partner like Lehtipiste, we can truly ensure that we have a great solution for the Finnish people and it’s a solution that we are very proud of!”

Pakettipiste is an agnostic network, which means that several carriers are using the parcel lockers for the final mile of delivery. At the moment, Matkahoulto, Pakettipiste and DHL are part of the network with more logistics providers signing up to deliver in the near future.