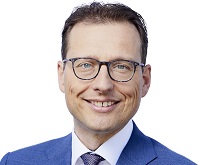 GLS aims to double operating profits and average double-digit annual revenue growth over the next five years, driven by B2C and international shipments, although ‘bolt-on’ acquisitions are not excluded, according to top executives.

Presenting the company’s new ‘Accelerate’ strategy to financial analysts yesterday (March 30), CEO Martin Seidenberg and CFO Thorsten Pruin said GLS will focus on International and B2C as key growth opportunities in the coming years, leveraging the strength of its network and business model.

But, responding to questions, Seidenberg said he “did not exclude” minor acquisitions in line with the long-term strategy of ‘bolt-on’ M&A deals to extend or strengthen the network.

GLS has improved its financial results significantly over the past 12 months. In the financial year ending March 2020, the company already made an operating profit of €238 million on revenues of €3.6 billion (+13%), achieved a 6.6% profit margin and delivered 667 million parcels (+10%), with a 48% B2C share.

But growth has accelerated dramatically over the past 12 months as the COVID-19 pandemic drove demand for deliveries of consumer online purchases. For the current year (ending March 2021), GLS expects volumes to be 25% higher at 835 million, with a 57% B2C share, and revenue growth of 24% to €4.5 billion. Operating profit will surge 64% to €390 million (c. £350 million), resulting in an 8.7% profit margin.

Describing the past year as a ‘step change’, Seidenberg said GLS had proven its strength during the COVID-19 pandemic by reacting quickly, adjusting operations to keep its network 100% available and increasing its B2C delivery capabilities.

Pruin highlighted financial improvements in three key markets. GLS Spain increased revenues by more than 50%, driven by strong B2C and international growth, and now has a mid-single-digit profit margin. The French and US businesses each generated 20% revenue growth with new customers and more B2C volumes.

Looking ahead, parent company Royal Mail announced yesterday that its international parcels subsidiary expects to grow revenue at around 12% CAGR from FY2019-20 to FY2024-25, more than double operating profit to €500 million and generate €1 billion of free cash flow. This would take GLS revenues to €6.3 billion on volumes of 1.15 billion parcels, generating a profit margin of 8%. Capex over the five-year period is expected to remain in the range of 3-4% of revenue.

Seidenberg said the five-year ‘Accelerate GLS’ strategy would focus on strengthening the cross-border business and positioning the company as a strong B2C provider while securing the B2B business.

In its cross-border business, GLS wants to outgrow the market with a 16% average annual volume increase (vs +9% for the market), increasing the international revenue share to 23% by 2025 from 19% last year.

To achieve this, the company will invest in its international network with at least three new hubs and various extensions, set up more direct connections between major European cities, create a ‘global gateway’ for intercontinental flows into Europe, and introduce new services.

The company plans to invest in its B2C network capacity and capabilities in its markets, including 20% more parcel shops and in some countries also parcel lockers, and strengthen its services with more consumer delivery options.

There will also be more investments in innovative customer experience solutions and sustainable operations to avoid and reduce emissions.

Royal Mail also said yesterday that trading this month “has been broadly in line with the update published on 10 March” and the group still expects adjusted operating profit of around £700 million for FY2020-21. Full results will be published on May 20.