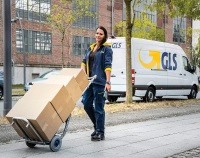 The German courier, express and parcel (CEP) market grew more slowly in the first half of 2019 due to an economic slowdown but the sector is still heading for another record peak season, according to new figures from the country’s Parcels and Express Logistics Association (BIEK).

In the first half of 2019, shipment volumes in the German CEP market increased by 3.8%. During this period, parcel shipments increased by 3.8% and express and courier shipments by 3.7%. As a result, over 400,000 more shipments are transported every day compared to the already strong past year, a study conducted by KE-Consult on behalf of BIEK found.

In 2018, in comparison, volumes in Europe’s biggest CEP market grew by 4.9% to more than 3.52 billion items while revenues increased by 5.2% to €20.4 billion, the association’s latest annual CEP Market Study (released in June) showed.

Marten Bosselmann, the association’s chairman, commented: "The fact that CEP services are growing steadily even in times of a weakening economy is an indication that their high-quality service is indispensable for our everyday lives - just like electricity and running water."

Moreover, CEP operators remain optimistic about another strong peak season at the end of the year. During the Christmas season (November and December), up to 14 million shipments will be transported on average in Germany every day. At peak times, it is even calculated that 19 million consignments are shipped on a single day.

This growth will once again be driven by B2C deliveries for private households as well as by some consumer-oriented B2B market segments, such as retail.

B2C volumes are predicted to grow by 7% to 8% during the 2019 peak season. This would be 25 million more shipments and take the total to about 355 million consumer parcels, according to the BIEK study.

In order to cope with this shipment volume, around 25,000 additional delivery staff will be employed by CEP companies during this time, BIEK pointed out.

In addition to the classic delivery at the front door, the parcel service providers offer numerous alternatives. Common delivery options include the choice of another delivery day, diversion to a parcel shop, to another address or to a parcel box or locker, to a selected neighbour or to a nominated safe place.

Bosselmann added: "Due to the various delivery options, the rate of unsuccessful delivery attempts is decreasing and thus also the traffic. If recipients who know that they are not home at the time of delivery use these alternatives more effectively, both they and the parcel service providers will benefit."

Overall, BIEK now expects the German CEP market to grow to more than 3.6 billion shipments and revenues of over €21 billion for 2019 as a whole, according to another analysis by KE CONSULT. The association, whose members comprise DPD, GLS, Hermes and UPS, will present the final figures for 2019 next May.