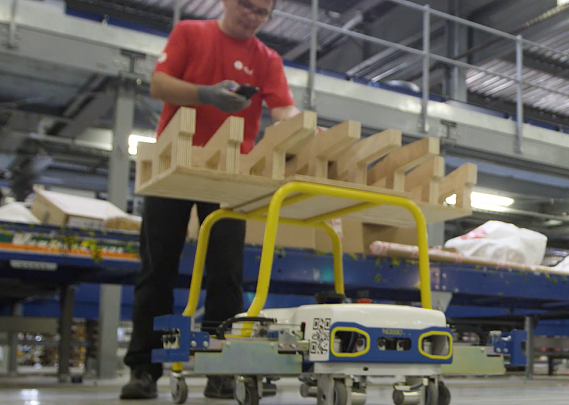 The Soly technology was already tested at the DPD site in Beaune in 2018. In 2020, the company’s 'Big One' hub at Coudray-Montceaux near Paris, its largest facility in France, will be equipped with the SOLYSTIC robots.

The DPD France will be equipped with around 50 Soly robots and a robotic station for the replacement of batteries. The deployment of the system will take place during this year and the leasing will include the maintenance service.

Soly is the SOLYSTIC solution for a fleet of mobile robots managed in real time by an IT system which supervises all movements and permanently locates objects. Combined with trolleys, robots transport objects individually. Objects are placed on trays and their images are acquired to allow an automatic recognition system to provide the information necessary for their handling.

Currently 3 to 5% of the parcels that transit through DPD hubs are handled manually because traditional technologies are not suitable. On the new site, the Soly robots, which require very little fixed infrastructure, will transport objects of atypical shapes and sizes to the loading gates, depending on their destination, in coexistence with the site's machines and operators.

The main advantages of this solution are firstly improved working conditions of the operators, who will no longer have to carry heavy and bulky objects, while secondly also reducing operating costs.

In France, more than 40 Soly robots were already introduced to the La Poste site, PIAC Roissy, in 2019. In Italy, the technology has been used since 2018 for small parcel sorting, the transfer of full tanks from the XMS machine, as well as for the handling of the containers around the TOP2000 machine.

In the United States, the Soly robots improved a customer’s stock management thanks to the automated replenishment of the distribution centres’ serving stores in 2018. Additionally, in 2017, they were used for the optimization of the preparation of the parcels of a distribution leader for dispatch, before handing the parcels over to delivery operators.