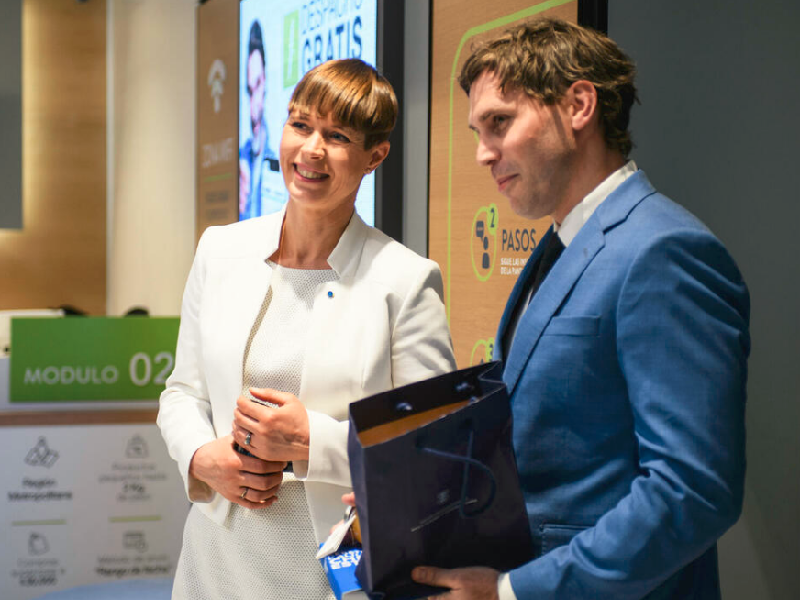 Estonian parcel locker robotic company Cleveron said it had a successful year in 2020 with new contracts, more customers and extra sales partners as well as product launches, despite the challenges of the COVID-19 pandemic.

In a 2020 round-up, the company outlined some of its ‘favourite’ projects of the year with a range of customers from different sectors around the world. It has also appointed several new sales partners in key markets over the course of this year.

Among Cleveron’s major customers are retailers such as Walmart, Falabella, Carrefour, Bilka and Woolworths. The company’s 3,800 parcel terminals can be found in 26 countries around the world. On average, 1.3 million packages are delivered through the terminals each month.

Chile-based Falabella started using the Cleveron 402 parcel robot to offer its customers a convenient and seamless click & collect experience. There are now 13 Cleveron robots in Santiago, 10 of which are Falabella's, which makes it the most densely populated city with Cleveron’s robots in the world.

One highlight was the visit of Kersti Kaljulaid, the president of Estonia, to the Falabella store in Santiago, where Cleveron installed its very first machine in South America.

“A great contribution was made by our local partner Vigatec, who became the official distributor of Cleveron’s solutions in early February 2020,” the company noted.

Cleveron partnered with XXL Sports & Outdoor in 2019. The Norwegian company is the largest sporting goods retailer in the Nordic region, with 84 shops in Scandinavia and Austria.

Woolworths Group, consisting of Woolworths Australia & Countdown New Zealand, is the newest addition to #teamcleveron. In November 2020, the Australian company went live with Cleveron 501 in Granville but are planning to roll out lockers at three other stores in the next months.

According to the Estonian supplier, Woolworths Group are the first grocery retailers in Oceania to adopt a robotic click & collect solution for their customers and is the first company to operate a Cleveron 501 grocery robot in Australia. The customer experience rating (NPS) is exceptionally high, sitting at 91%, Cleveron pointed out.

Meanwhile, Cleveron has extended its international sales network with more official distributors in major markets in recent months. The partners not only sell the lockers but provide installation and on-site maintenance.

In North America, Cleveron signed up three well-established distributors, Lozier+CASI, Luxer One and Telaid. The company’s largest client in the USA is Walmart, which uses more than 1,600 Cleveron robots to hand out their online orders in their stores across the country.

“In the US, our main client is the world’s largest retailer (Walmart) who is open to test advanced technological solutions. But in other conversations we often saw that despite parcel lockers and robots being very common in Estonia, parcel lockers even being the most preferred delivery method here, they were still considered a thing of the future in the States,” explained Cleveron CEO Arno Kütt.

“Today, due to the pandemic, the US e-commerce market has jumped five years into the future within just a couple of months, and the retailers are very interested in technologies which will help to make parcel handling more effective. Having local and experienced distributors with an already developed client portfolio will help us to expand our footprint there,” he explained.

In Europe, German shopfitting company HARRES Metall-design GmbH has been appointed as Cleveron’s official distributor for Germany, Austria and Switzerland. So far, Cleveron has two parcel robots in Germany, in the stores of one of its world-renowned clients.

Elsewhere, HMY is now the company’s official distributor in Spain, Portugal and Andorra, while Dubai-based SPAN Group as its official representative in the Middle East.