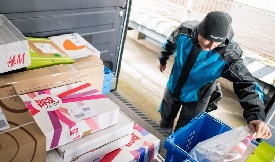 Parcel and express delivery companies in North America, Europe and other regions have switched into full peak season operations this week as consumers rush to snap up Black Friday bargains from online retailers.

With many retailers already launching ‘Black Friday’ offers more than a week ago, online retail sales are expected to surge dramatically compared to normal levels, generating tens of millions of additional parcels for delivery over the coming days and weeks.

Promotional sales will continue through Cyber Monday (December 2) and beyond as consumers seek online deals or buy Christmas presents early. For their part, retailers are seeking to maximise sales during this year’s shorter online shopping season, which runs from late November to late December. (Black Friday was one week earlier in 2018.)

Double-digit sales growth in the US

In the USA, consumers have already spent $50 billion online so far this month, nearly 16% more than in November 2018, according to data researchers Adobe Analytics. One factor is that many online retailers (including Amazon, Walmart and Target) ran promotional sales well ahead of ‘Cyber Weekend’, which kicked off yesterday with the country’s Thanksgiving Day holiday. Overall US online holiday season spending could increase about 14% to nearly $144 billion this year, according to Adobe Analytics.

The three biggest delivery operators – the US Postal Service, UPS and FedEx – have all declared they are “ready to deliver” the 2019 holiday season after investing in additional capacity and enhanced services.

UPS expects daily volumes to hit 32 million between November 29 and December 30, which would be 5% more than during last year’s holiday season and 60% more than the 20 million delivered on an average, non-peak day. Similarly, FedEx predicts record daily global volumes of 33 million packages on Cyber Monday (Dec. 2), strong volume spikes on the following Mondays during December. The US Postal Service expects to deliver about 800 million packages in total between Thanksgiving and New Year’s Day and has expanded deliveries in Sundays in major markets in response.

Black Friday establishes itself across Europe

In Europe, Black Friday is already very well-established in the UK and becoming increasingly popular in other major markets such as Germany and France as well as other countries.

In the UK, expectations for this year are mixed due to the already high level of online retail sales, the weak economy and other factors. E-commerce association IMRG issued a downbeat peak season sales forecast earlier this month, warning that online retail sales might only grow by 2-3% during the Black Friday sales period while December sales might only increase by 1-2%. Today, however, the association followed up with initial figures showing that online retailers appear to be benefiting from launching Black Friday offers much earlier this year with strong early sales.

Andy Mulcahy, Strategy and Insight Director, IMRG, commented: “Making those sales early in the peak period could be seen as positive, but there’s also a larger question at hand: what impact will this early spike have on order volumes later in the week (and, indeed, into December)?

“There would appear to be two possible outcomes here – either the Black Friday period is going to be very successful this year, against expectations, and deliver a sustained period of strong sales growth, or a lot of the volume has been dragged forward and will drop off over the Black Friday weekend, which has traditionally been the busiest period. If that should happen, 2019 will go down as the year that ‘Black Friday’ stopped being on Black Friday.”

Among leading British carriers, Hermes expects a very strong 14% rise in peak season volumes and has invested heavily in additional capacity to enable its network to process up to 2.5 million parcels a day. The company will make deliveries seven days a week from the beginning of December up to and including Christmas Eve. Royal Mail, DPD UK and Yodel have not yet disclosed their peak season expectations.

Meanwhile, in Germany, both retailers and logistics companies are ready for peak season, according to the national e-commerce association Bevh. “Unless the weather turns crazy and we cannot make deliveries, then we expect another excellent holiday season,” commented the association’s executive director Christoph Wenk-Fischer.

Online sales over the Cyber Weekend alone could surge by 22% to €3.1 billion, according to the German retail association HDE. About one third of German online shoppers plan to buy online today and 23% on Monday, according to a HDE consumer survey. “Black Friday and Cyber Monday are becoming better known and more popular here in Germany,” explained director Stefan Genth.

For their part, CEP operators are optimistic about another strong peak season as B2C volumes grow by up to 8% compared to last year. Up to 14 million parcels could be transported daily on average, rising to 19 million on peak days, according to industry association BIEK.

In France, online retail sales could surge by a dramatic 30% to €1.7 billion over the four-day Cyber Weekend and grow about 9% to more than €20 billion during the overall peak season, according to trade association Fevad.

La Poste said it expects its usual daily volumes to double two million parcels a day from this week onwards due to early Black Friday sales. The postal group, which claims to be carbon-neutral since earlier this year, also highlighted its investments in electric vehicles and other zero-emission delivery methods to reduce its environmental impact.

For its part, the group’s European parcels network DPDgroup said that its country businesses are ready for the year’s biggest sales period, starting with Black Friday, with longer working times, additional staff and vehicles, more capacity and close collaboration with major customers.

After delivering a total of 200 million parcels across its network in the 2018 peak season, DPDgroup forecasts 20% volume growth compared to normal business days this year, and even more than 100% growth on peak days. Its busiest day is expected to be Cyber Monday (December 2) with 10 million parcels, and probably a similar volume on another peak day in the week before Christmas.