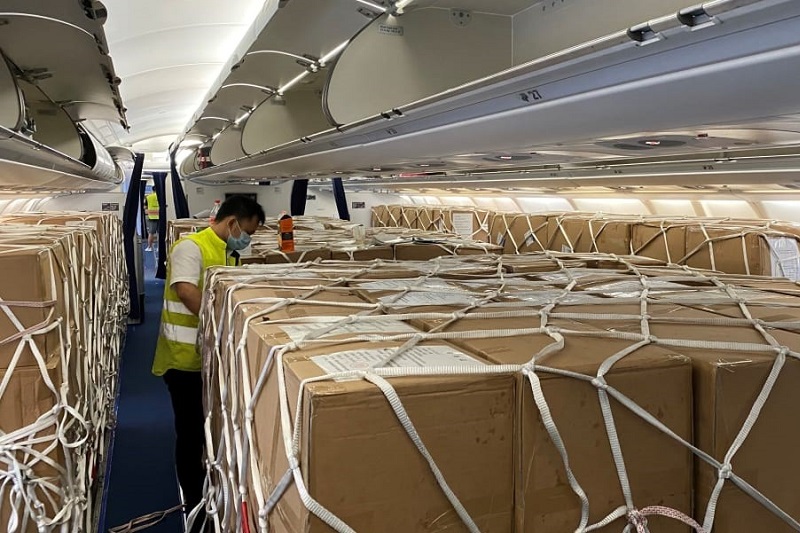 Freight replaces passengers on this Lufthansa A330 passenger plane

Air cargo carriers are adding more maindeck and bellyhold capacity to carry high volumes of personal protection equipment (PPE) to combat the coronavirus and also to cover demand for regular air shipment flows following the easing of lockdowns in a number of countries.

Postal, parcel and express operators along with freight forwarders have all been hit by airlift capacity shortages on key routes over the past few months as worldwide air cargo demand and supply has fluctuated dramatically during the Covid-19 pandemic.

Although down 75% on 2019 levels, as a result of the pandemic having a drastic effect on passenger air traffic, global widebody belly capacity has increased by 10% over the past week, according to forwarder Agility’s latest COVID-19 air freight operational update issued today (May 20) which quoted data from analyst Seabury.

Freighter capacity is 13% to 19% higher than the same week in 2019, it added. Overall, however, global air cargo capacity is 28% below that for the equivalent week last year.

Earlier this week, Lufthansa Cargo announced that it is now offering up to 14 additional weekly flights from the Chinese city of Shenzhen to Frankfurt using Airbus A330-300 passenger aircraft in all-cargo mode. The initial 'pfreighter' flight carried around three million respiratory masks and other medical protective equipment on behalf of the logistics company Fiege.

“With the newly-opened route to Shenzhen, a total of up to 49 additional weekly flights with Lufthansa passenger aircraft for the transportation of goods are offered in China,” it said.

As for maindeck capacity, currently, all of Lufthansa Cargo's 17 freighters are in continuous operation, flying medical supplies to destinations worldwide, for example. From and to mainland China alone, 16 flights a week are currently operated with B777F wide-body freighters with a standard load capacity of around 103 tonnes.

In the USA, American Airlines has expanded its cargo schedule in May to provide 140 weekly flights to 15 cities in Asia Pacific, Europe and the Caribbean, up from 80 flights previously.

Somewhat ironically, demand for air cargo is driving the return of Delta Airlines' passenger services from the US to Germany and the UK, for the first time since the COVID-19 pandemic closed borders. Beginning May 21, flights to Frankfurt and London will operate three times weekly from Atlanta and Detroit, respectively. The flights will also be available for passenger travel.

“Keeping global supply chains open is more important now than ever and these new services will enable suppliers to meet the needs of their customers,” said Shawn Cole, Vice President, Delta Cargo. “We’re receiving daily requests for shipments of medical supplies as well as goods that keep businesses in operation. By also opening these services to passengers, we can facilitate essential travel between the UK, Europe and United States.”

Cargo will be transported between Los Angeles and Frankfurt, via Atlanta, and between Chicago and London, via Detroit, increasing the shipping opportunities for cargo customers.

Delta is also launching scheduled cargo-only flights between New York-JFK and Mumbai, India, this month, subject to foreign government approval. And the airline continues to operate cargo-only services from Asia, which launched last month to transport much-needed medical equipment to the US.

Earlier this month, Dubai-based cargo carrier Emirates got back to operating close to 100 daily cargo flights as it began rebuilding its global cargo network following the shutdown of most of its passenger flights.

Alongside 11 Boeing 777 freighter aircraft, it is now also operating around 60 of its Boeing 777-300ER passenger aircraft as dedicated cargo aircraft, expanding its scheduled cargo network to 67 cities across six continents. This includes 11 destinations in the Middle East, seven in Africa, 22 in Asia, six in Australasia, 15 in Europe and six cities in the Americas.

To the backdrop of the COVID-19 pandemic, Qatar Airways Cargo said it is continuing to operate a significant cargo schedule with approximately 175 flights per day. This compares with almost 100 cargo flights per day in April.

During the past month the Middle East operator has worked closely with governments and NGOs to transport over 100,000 tonnes of medical and aid supplies to impacted regions around the world on both scheduled and charter services, the equivalent of roughly 1,000 fully loaded Boeing 777 freighters.

Meanwhile, US cargo-carrying airline, Atlas Air, is reported to have brought three of its B747 converted freighters, which had been parked, back into service in response to increased airfreight demand driven largely by the pandemic.